A cheaper plan of Rs.153 has been launched for JioPhone users

Mukesh Ambani unveiled the much-awaited 4G feature phone from Reliance Jio named JioPhone earlier today at Reliance Industries' Annual General Meeting. Currently, most of the phones in the Indian market that support 4G networks are smartphones, while majority of the cell phone users in India use feature phones. Since Reliance Jio is a 4G VoLTE exclusive network, rumors have been doing the rounds for a while that they'll launch a subsidized affordable 4G enabled feature phone to increase their customer base. 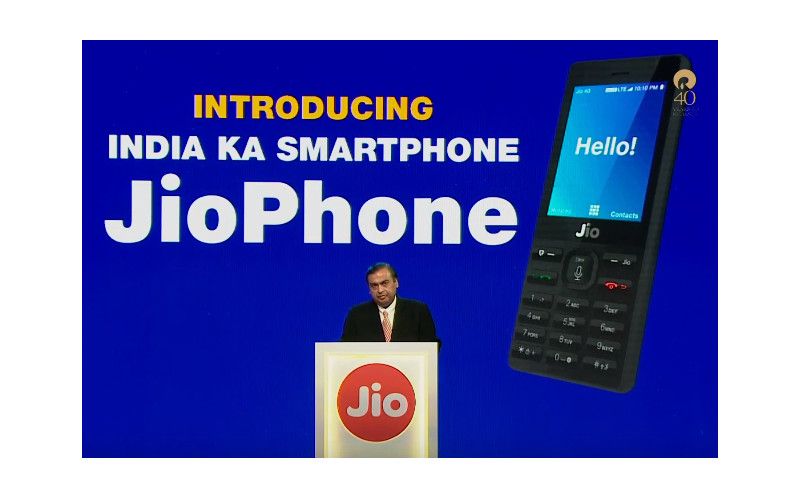 THE DEVICE
The JioPhone will come with a voice command facility which recognizes speech to make calls, type, send texts, and open apps. The device can be used in 24 Indian languages and will have Jio Apps like Jio TV, Jio Music, and Jio Cinema pre-installed in it. It will also be able to make digital payments. Details about camera, phone memory, and other specifications haven't been revealed yet.

PLANS
Jio has introduced cheaper tariffs for JioPhone users. For a payment of Rs. 153, JioPhone users will get free voice calls, free SMS, and unlimited data for a month. The FUP limit (daily 4G usage limit) for the plan wasn't mentioned during the launch. Further, two sachet plans of Rs. 24 and Rs.54 have been released with validities of 2 days and a week respectively.

JIO PHONE TV-CABLE
The JioPhone can be connected to a television to enjoy Jio Apps content like movies, music, and live TV on a bigger screen. The cable used for this will be compatible with CRT televisions too. But users will have to subscribe to the Rs. 309 plan or a plan of a higher denomination in order to avail this service.

PRICE
The device will be available for a payment of Rs. 1500, but this amount will be refunded after three years. Thus, the effective price of the phone is Rs.0.

WHEN WILL IT BE AVAILABLE?
The JioPhone will be given out to select users for testing on August 15th. The pre-booking for the device will begin on 24th August via MyJio App and Jio retailers. The phone will start reaching customers in September.

The launch of JioPhone marks yet another ambitious move from Reliance Jio since its launch last September. The success of this phone depends largely on the readiness of feature phone users to move to a data regime. We have seen many times in the past how Indian consumers are the most difficult to predict. Therefore, though the idea of a 4G enabled feature phone looks good on paper, whether it will be accepted by the masses has to be seen.
Written by Arjun Dev Mullankara.
Last updated on 05-08-2017. Published on 21-07-2017.

Published by Mobiles4Sale in category News
Latest Comments. Share Your Opinion
Nice phone
By Monti Thakur on 26-08-2017
This phone will be successful only of it offers WhatsApp support.
By Rohan Saraswat on 22-07-2017
It's very awesome futures and many more offers for poor peoples like a used this mobile
By Jay Kranthi on 22-07-2017
Add Your Comment
Low Interest Loan For Buying Mobile Phones