While smartphones have no doubt have made our lives easier, one of the main grievances associated with them is their pathetic battery life. Many of us have been victims of our phones getting discharged during important situations, often causing inconvenience and at times even putting us in danger. For instance, if your phone gets switched off while traveling, you’ll be totally lost in an unknown place; your hotel booking(s), maps, contacts, flight/train/bus tickets, transportation apps (like Uber) and even online wallets would be accessible only through your phone and you’d be at strangers’ mercy until you get access to a plug point. 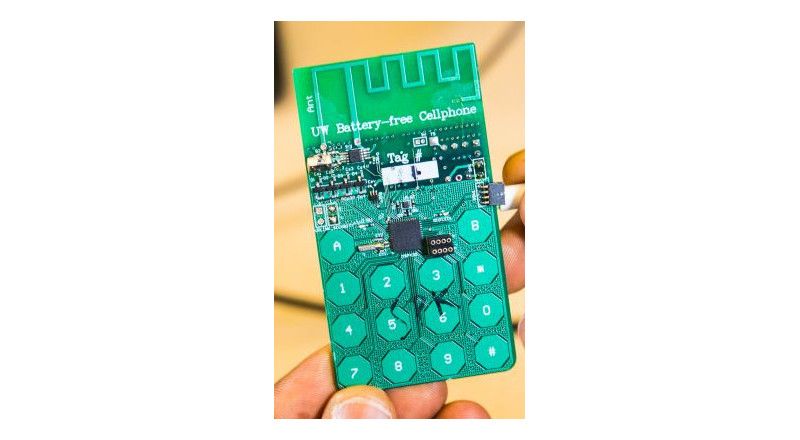 Well, days of charging a mobile phone might soon be over thanks to a team of researchers at the University of Washington who have designed a prototype of a cell phone which uses no battery. The scientists were able to dial and receive Skype calls using the prototype.

Conversion of analog voice signals to digital signals is the most power chugging process in cellular communication. This process has been replaced in this battery-free phone. For transmission of speech, vibrations from the phone’s microphone are used to embed speech in the reflected radio signals. For receiving speech, speech embedded in radio signals is converted into vibrations which can be read by the phone’s speaker.

A base station is necessary for transmission and receipt of radio signals. The research team says their base station technology could be integrated into WiFi routers and cell phone towers in the future.

The battery-less phone requires 3.5 microwatts of power and researchers have conceived methods to obtain this power from two sources. Either the power can be gathered from ambient radio signals transmitted by a base station or else power can be harvested using a tiny solar cell.

The scientists are working on further improving the prototype by adding an e-ink display and even a camera. The team’s findings have been published in the Journal Proceedings of the ACM on Interactive, Mobile, Wearable and Ubiquitous Technologies.
Written by Arjun Dev Mullankara.
Last updated on 05-08-2017. Published on 10-07-2017.