OnePlus made a huge impact when they released their perfect smartphone OnePlus 3T with an affordable price tag in the premium smartphone segment. With the specifications and premium design, OnePlus 3T competed with the iPhone 7, Samsung S8, and various other premium arrays of smartphones makers like LG and Honor and Oppo. 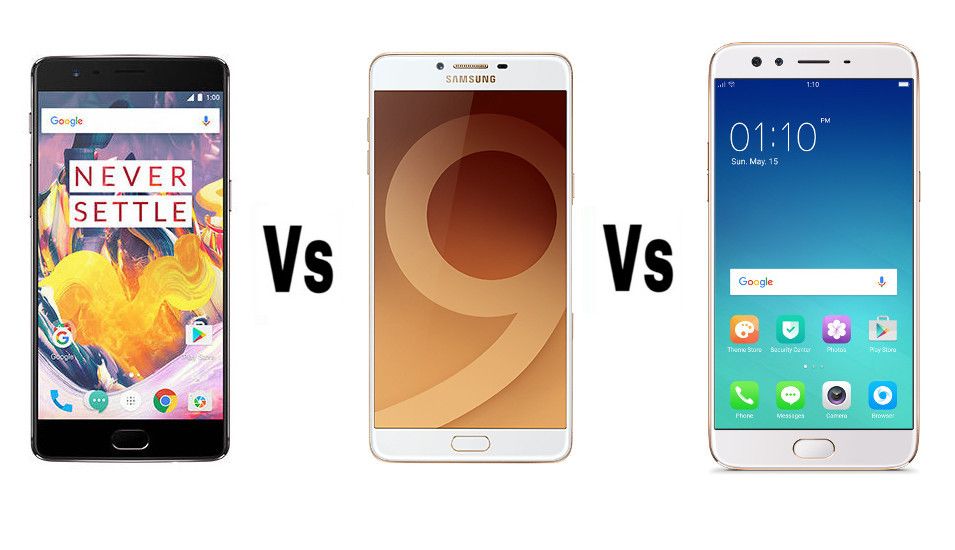 Samsung introduced premium smartphones that cater to a wider audience, while the Chinese company Oppo was trying to have a name in the smartphone business. While smartphone manufacturers were busy making high-end phones, Smartphone buyers were at ease as this trend favored them to have a lot of options to choose from.

The following is a Benchmark and Performance review that gives a comparison on the OnePlus 3T, Samsung Galaxy C9 Pro, and Oppo F3 Plus. Let's see how much worth are these smartphones for the earned money.

OnePlus 3T is a premium smartphone from the Chinese company OnePlus. What makes this smartphone apart from others is the power packed design and specification it provides under a reasonable price tag.

OnePLus 3T is a 5.5-inch smartphone with Corning Gorilla Glass 4 protection and comes sealed in a premium metallic housing. It boasts a front facing fingerprint sensor and has a 16MP primary camera with high-speed autofocus technology (PDAF) and an updated Electronic (EIS) and Optical (OIS) image stabilization technology, it also sports a 16 MP secondary camera of which takes full-HD images.

The smartphone is powered by a Qualcomm Snapdragon 821 MSM8996 Pro (2.35 GHz) Quad-core processor with Adreno 530 GPU. It has 6GB of RAM and possesses an internal storage of 64GB but there is no memory card slot present, which is a bummer.

OnePlus 3T runs on its Oxygen OS 4.0.2 and is upgradable from Android Marshmallow to Android Nougat. OnePlus 3T have a powerful 3400mAh Li-Ion battery coupled with a powerful processor to give glitch free gaming and digital experience for long hours. The smartphone is available in Gunmetal, Soft Gold, Midnight Black shades and have a price tag of INR 29,999.00

Samsung introduced its Galaxy C9 Pro with a bigger 6.0-inch sAMOLED display with 367 PPI pixel density. The display is protected by Gorilla Glass. The smartphone comes with a 16MP rear camera with 1080p full-HD video recording and a front-facing 16MP camera. It has 6GB of RAM and runs Android Marshmallow operating system out of the box with a 1.95GHz Qualcomm MSM8976 Snapdragon 653 Octa-core processor, with Adreno 510 GPU and an internal storage of 64GB.

The C98 Pro is a dual sim smartphone with a dedicated memory card slot which is an added advantage over the OnePlus 3T as it lacks a memory card slot. The smartphone have a non-removable 4000 mAh battery and comes in three shades Gold, Pink Gold, and Black with a price tag of INR 34,500.00
which is higher than the Oppo F3 Plus and OnePlus 3T.

The Chinese Electronics Manufacturer Oppo is trying to build a name in India with their smartphone business. They offer an array of premium styled smartphone series to choose from.

Oppo F3 Plus is a stylish smartphone with 6-inches vivid display and has a pixel density of 368 PPI. The smartphone is packed in a metal body with a display protected by Corning Gorilla Glass 5 and has a front-mounted fingerprint sensor for protection.

The smartphone is powered by Qualcomm MSM8976 Pro Snapdragon 653 Octa-core processor and has a 16MP primary camera with Sony IMX398 sensor with phase detection, Optical image stabilization and dual-LED for better clarity pictures and has 4K video recording capability. The smartphone comes with 4GB of RAM, and 64GB of internal memory and can be expandable up to 256GB. It has a hybrid dual SIM and comes with a battery capacity of 4000mAh and comes with only two shades Pink and Gold, and is priced INR 27,899.00

The benchmark and performance Comparison of OnePlus 3T, Samsung Galaxy C9 Pro, and Oppo F3 Plus is done with the Geekbech. Geekbench is a cross-platform processor benchmark system. It shows separate scores for Single-core and Multi-core performance and simulates close to real-world scenarios. Geekbench 4, their latest benchmark system uses scores that are calculated against a baseline score of 4000, which represents the performance of an Intel Core i7-6600U @ 2.60 GHz. For accurate benchmark and performance review, we have taken Geekbech, as they are one of the pioneers in benchmark testing in the industry right now.

In the case of Samsung Galaxy C9 Pro, it has a single core performance of 1304 which is slightly below as compared with the Oppo F3 Plus as it scored 1477. While the Samsung C9 Pro scores higher in terms of multi-core performance with a score of 4366, which is above than Oppo which scores only 4034. Both the smartphones have a huge gap in benchmark scores compared with the score of OnePlus 3T, making it only comparable in a price range.

Benchmark scores have its limitations and can only be seen as a frame of reference as of how the smartphones will behave in real life scenarios. The three smartphones under comparison keep up with the daily usage of the users, but with the OnePlus 3T having an edge over the other on performance. When looking at the price range, Samsung C9 Pro is more costly than the other two phones. Oppo F3 Plus is fairly priced with the likes of OnePlus 3T. And finally, it's up to the users to decide which smartphone suits for them.
Written by Aswin Asok.
Last updated on 31-05-2017. Published on 31-05-2017.